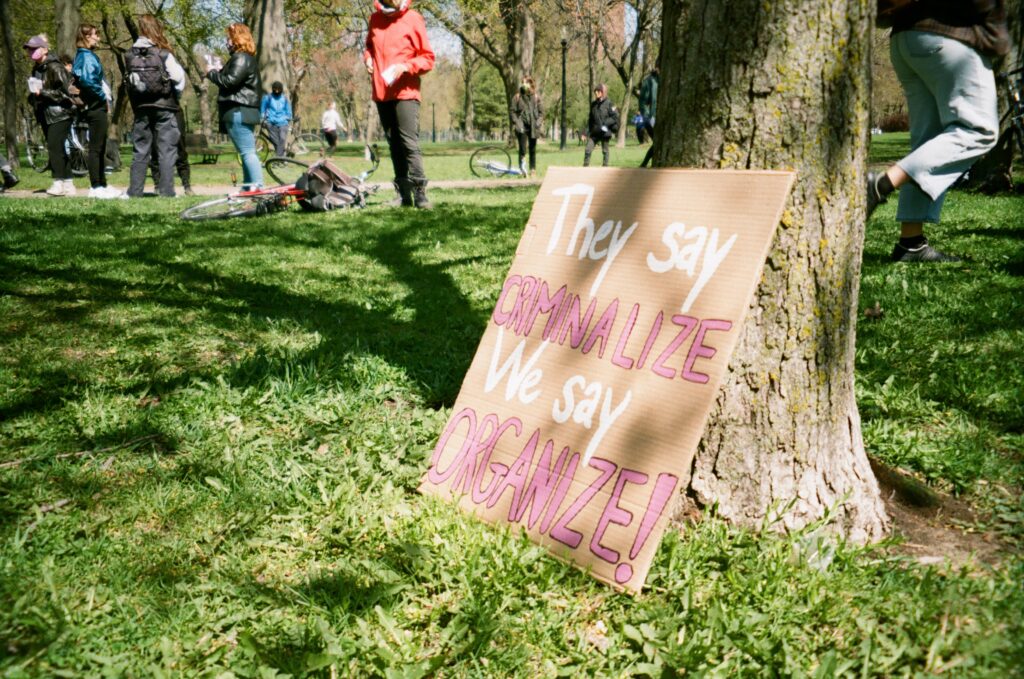 Sex workers cannot be ignored anymore. In unceded territories that we call Canada, like elsewhere around the world, they continue to be targeted by harmful policies that criminalize sex work and sex workers, under the guise of saving them from human trafficking and sexual exploitation. Far from reaching their goals of eradicating the sex industry, these policies instead marginalize and isolate sex workers from social and legal services, and increase their vulnerability to violence. In response to this repression, sex workers organize to demand better working conditions and equally, worker status with the rights and social protections that comes with that. We argue that it isn’t the nature of the work itself (the exchange of sexual services for money) that exposes sex workers to violence, but rather the repressive laws that govern it.

The implementation of the Protection of Communities and Exploited Persons Act (PCEPA) in 2014 made sex work illegal for the first time in Canada. The PCEPA prohibits communicating for the sale of sex in a public space; prohibits advertising the sexual services of another person; prohibits profiting materially from sex work; and criminalizes the purchase of sexual services in any and all contexts. This legislative regime, advocated by many anti-prostitution feminist groups, claims to eliminate demand by criminalizing clients and third parties in order to abolish the sex industry. In fact, since its passage, this law has made sex workers more precarious and vulnerable to violence. By representing sex workers as victims, these laws normalize rather than combat violence against them.

Indeed, these laws create unsafe and exploitative work environments and maintain substandard working conditions. These conditions are the source of sex workers’ daily worries, ranging from difficulties in getting paid to the impossibility of denouncing violence by clients, employers and law enforcement through legal procedures. For those who work independently, criminalization remains an issue, as clients are less likely to provide important security information such as their real identity. This makes it difficult for sex workers to create and maintain important safety mechanism at work, and has led to the murder of several sex workers. For those who work on the street, the prohibition on communicating for the sale of sexual services in public spaces (near parks, schools and daycares) means that they end up working in secluded, poorly lit areas – out of reach of being witnessed – putting them at greater risk of violence. Immigration laws in addition to criminal provisions around sex work encourage more surveillance of migrant sex workers in the industry, and as a result, they may face loss of status, detention, and deportation if their work is discovered – even if they work in legal sectors of the industry such as licensed massage parlors and strip clubs.

Decriminalization was implemented in New Zealand 20 years ago, and as a result, sex workers are able to put safety mechanisms into place for their work and seek recourse when they experience violence on the job. This government has just started to initiate its mandated task of studying the impacts of PCEPA, even though it should’ve been done five years after its implementation. Time is running out, as sex workers continue to suffer the impacts of criminalization!

We need to repeal the Protection of Communities and Exploited Persons Act and decriminalization of sex work now!

This letter was signed by 77 individuals and 56 organizations, all over the unceded indigenous territories that we call Canada, in different sectors: unions, academic, arts, harm reduction, STI prevention, women, migrant, indigenous and trans rights.